Birding at the Bend - The Red Head Woodpecker 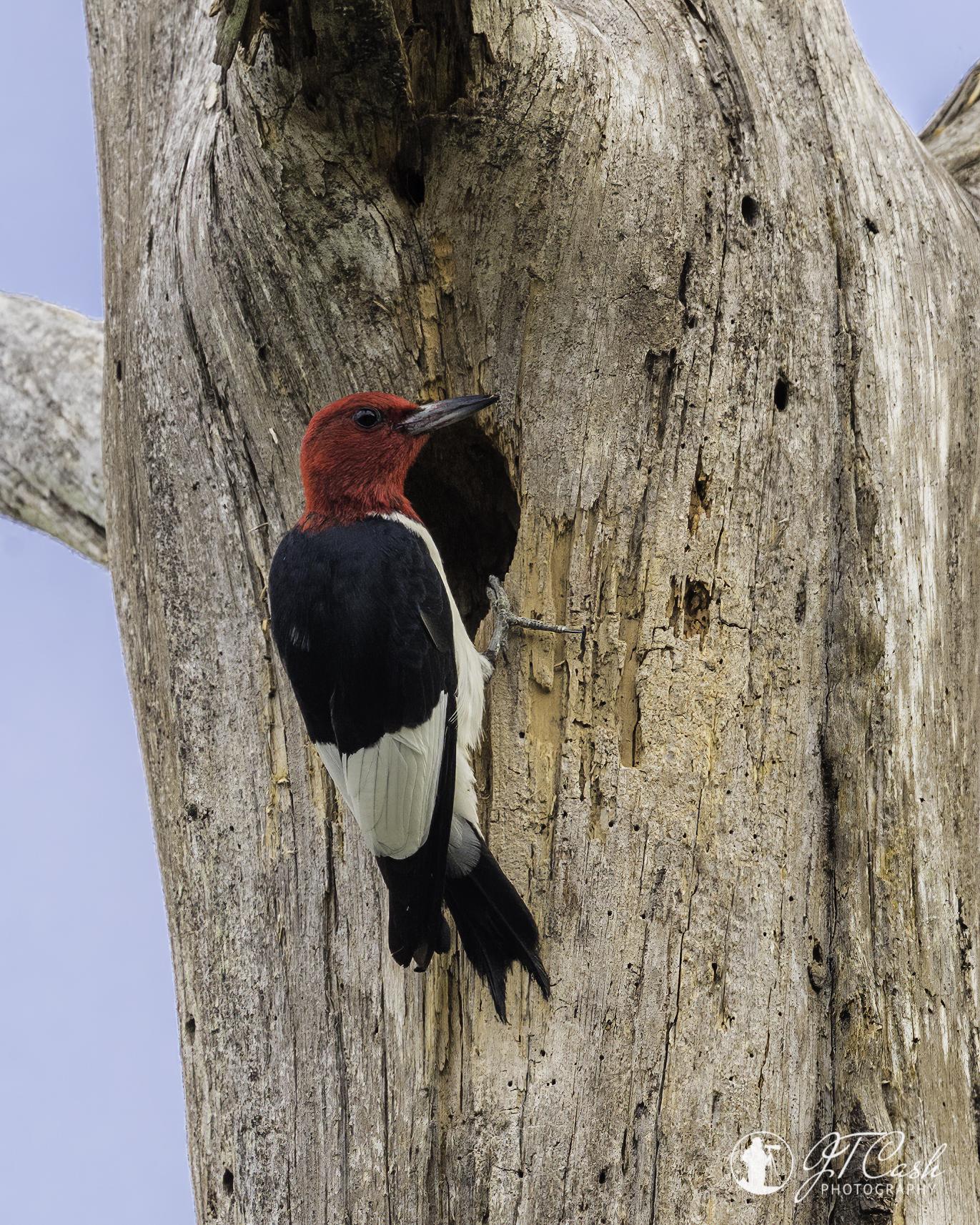 Once very common throughout the eastern U.S., the Red-headed Woodpecker population has been declining moderately rapidly for many years, and recent surveys show the trend is unfortunately continuing. It is believed the decrease is due to loss of habitat from the clearing of forests for developments, loss of nesting sites from the cutting down of “unsightly” dead trees (snags), the suppression of fires found naturally in some forest ecosystems, and collisions with automobiles. However, fortunately for us “bird nerds” and conservationists alike, this striking and unmistakable woodpecker seems to be thriving locally at Chattahoochee Bend State Park (The Bend as we call it).

Why is this, you may ask? Within its 2,910 acres of diverse, beautiful, wild forests, the park holds several land areas conducive to the preferred habitat of the Red-headed Woodpecker. And not just the Redheads, as several cavity-nesting birds call this area home, such as the Downy Woodpecker, Pileated Woodpecker, Red-bellied Woodpecker, Northern Flicker, Brown-headed and White-Breasted Nuthatches, Carolina Chickadee, Carolina Wren, Chimney Swift, and others. Sadly, the species from the list that has experienced the most significant decline is the Red-headed Woodpecker, which favors nesting in old tree snags with little bark remaining.

Within the boundaries of The Bend, many of the vital habitats feature desired by Red-headed Woodpeckers can be found, such as open woodlands with oaks and pines, burned areas, river bottom forest, and most importantly, an abundance of dead trees and snags. Combine this with The Bends’ conservation efforts, such as prescribed burns and leaving the snags to be taken care of by nature, these conservation efforts contribute to a sustainable habitat area for many cavity nesters.

Inside the dead trees and limbs, these cavity nesters may renovate and occupy an existing cavity or excavate a new one and can do so in as little as 2-14 days, depending on the desired size and wood density. Interestingly woodpeckers have been clocked at pecking up to 20 times a second! The size of the cavities can vary between 6-18 inches deep and 3-6 inches wide, with a 2-inch opening located anywhere between 5 to 80 feet above ground. During nesting season, which typically begins in April and runs through July, the Redheads have one to two broods each season with clutch sizes containing up to 10 eggs.

We are most excited to report that we have spotted several successful nesting pairs of Redheads this breeding season at The Bend! Luck was indeed on our side with a well-timed visit when we witnessed the moment a Redhead nestling became a fledgling as it took its muchly apprehensive first leap from the safety of its 50-foot high cavity out into the big world. On this particular morning, we noticed a few behaviors different from the typical routines of the parents taking turns to frequently visit the cavity bringing a variety of treats to nourish their ever-begging nestling. Instead, the parents were seemingly avoiding the cavity and feeding their youngster. Continuously flying back and forth between nearby trees and snags, they would land within sight of the nestling and constantly call out to it. As a result, beyond peeking out just a head’s length to look for mom and dad or get relief from the heat, the nestling was much bolder. Several times we noticed it would protrude more than half of its body out, placing its front toes around the outer edge of its cavity entrance. Each time it took a look down and would quickly disappear back into the safety of its cavity. And suddenly, without warning, it took its faithful first flight. Soaring, more like flying semi-gracefully, it successfully made its way into the tree where the steady calls and beckoning of its parents urging it to join them had continued for the previous few hours. Hiding back in a tree line, from a safe distance with our long lens and binoculars, witnessing the fledge, the behaviors, and the communications between the nestling and its parents all made for a spectacular morning and one for the memory book.

Listen to Red-headed Woodpecker Calls and Other Sounds

As you will notice in the photos, the coloring of the nestling is much different, more subdued from its parents. The adult Redheads are dramatically patterned birds, leaving them called the “Flag Bird.” With an average length of 9” and wingspan of 16-17”, it is the only woodpecker with a completely red head. Its neck and throat are also red, its underparts are white, its back is dark bluish black, and it displays a large white patch on the bottom of the wings. Its rump is white, and its tail is black and white. The bill is long, sharp, and blue-grey, and the eyes are dark brown. Both sexes are similar in looks, with the males slightly larger than the females. The juveniles start as brownish grey with a grey head and two black wing bars on white secondary feathers. As they grow and become immatures, a tinge of red begins to show on the head. During their first winter and after their first molt, they don their brilliant red cap and contrasting black and white suit and set out to learn to drum to attract a life-long mate.

As avid nature photographers and conservationists, The Bend is one of Jimmy and Tammy’s favorite local birding, photography, and hiking sites, describing it as a true treasure to visit, explore, unplug and immerse oneself in nature. Jimmy and Tammy also enjoy being volunteer members of the Friends of Chattahoochee Bend State Park.