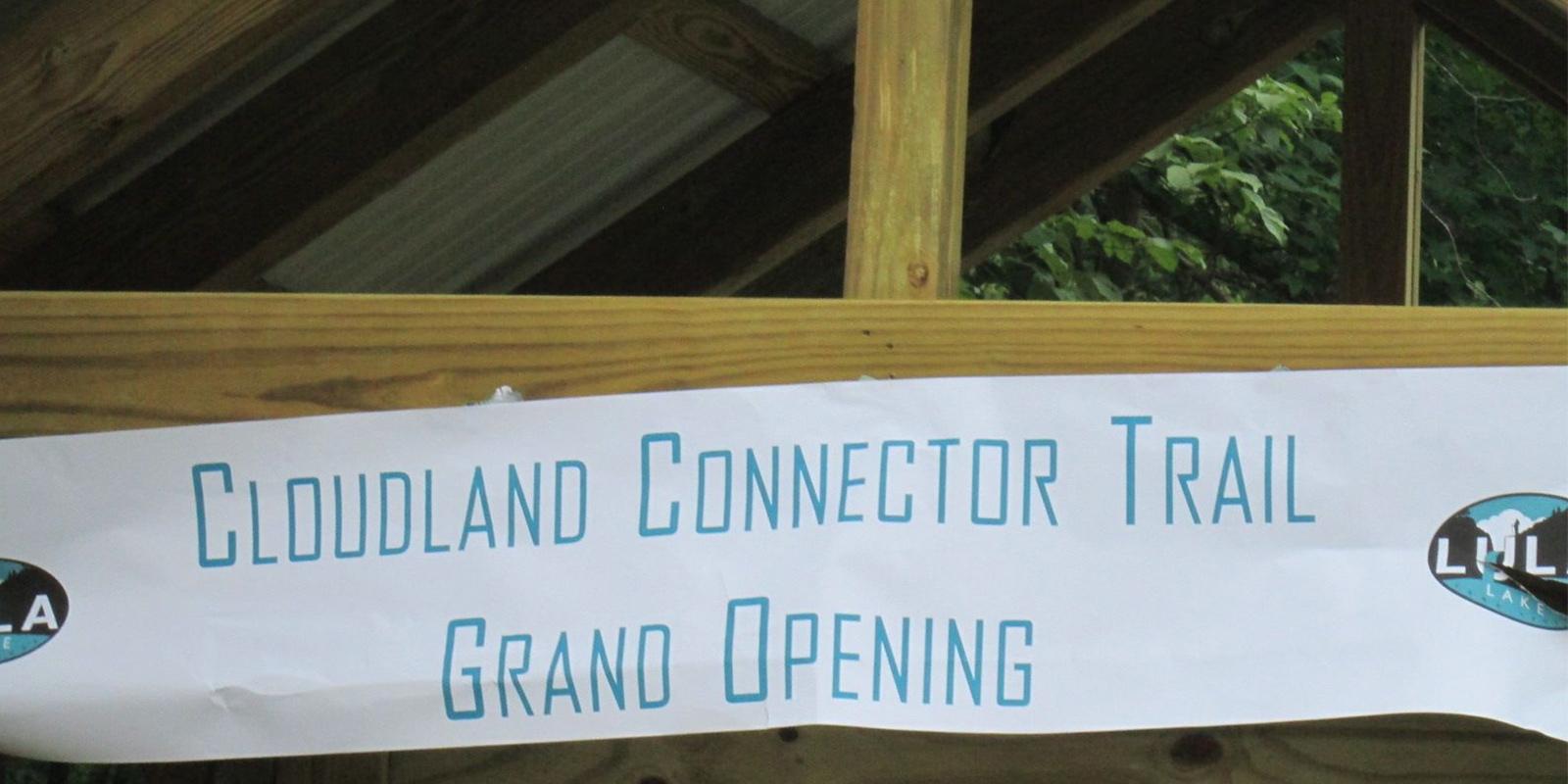 After 10 years, four phases, and 60 miles of sweat and determination, the Cloudland Connector Trail is complete. The trail was made possible by many people and organizations, including Friends of Clouland Canyon State Park. Lula Lake Land Trust was a principle component and a group of dedicated volunteers, led by SORBA, constructed the trail. Local foundations helped provided critical funding. Among those taking part at the dedication were Bobby and Elliott Davenport, who helped assemble much of the land for the project that is already seeing wide use by both hikers and bikers as well as those on horseback.

A feature on the trail is a high bridge over the scenic Bear Creek. To construct the bridge over the remote creek, a construction road was built from Scenic Highway so supplies and volunteers could access the area and build the bridge.
(Click Here to view the map)

This particular trail—the final piece of a 10-year process—is a part of over 60 miles of hiking, mountain biking and horseback riding trails within the current trail system.

"It started with a planning session about 10 years ago," said Tricia King, executive director of the Lula Lake Land Trust. "We looked at some of the land we protected and realized we were on our way to connecting to Cloudland Canyon State Park."

A few more strategic pieces fell into place, but what was just a vision soon became a reality for the organization.

They devised a four-phase plan of which the first few stages were completed about five years ago. Those phases included the construction of Five Points Trail, which has become one of the most popular mountain biking trails in the region.

The trail begins at Nickajack Road and follows the Long Branch to High Point (considered the highest point of Lookout Mountain). Across Lula Lake Road, the trail continues to the Durham mines past Five Points and on the Ascalon Trailhead.

From there, Cloudland Canyon is accessible by crossing Ascalon Road, Bear Creek and Scenic Highway (Hwy 189).

Now that all phases of this project are complete, King said Lula Lake Land Trust will focus on maintenance and other projects.

"We plan to take a look at some of the pieces of land that we have and the ability to create more trails," she said. "You’ve got to maintain what you’ve already built ... There are trails on High Point that could be improved."

But this year also marks the 20th anniversary of the trust, and King said they plan to announce something soon to commemorate the occasion.

The core property of the Land Trust, including Lula Lake and Lula Falls, is open on the first and last Saturday of each month, from 9 a.m. to 5 p.m. Eastern. Hiking, picnics, fresh air, and sunshine. Trails can accommodate cyclists of all ages and abilities, from sweet single track to wide fire roads for the kids. Dogs welcome on a leash.

Open Gate Days are free of charge, but donations are encouraged to help support our ability to keep the property available to the public. Entrance gate closes at 4 p.m. and exit gate locks at 5 p.m. 5000 Lula Lake Road. See you there!

A celebration was held at the state park at the new trailhead for the 14-mile trail that also features miles and miles of side trails. The trail system passes along a large section of the old Durham mines property that was finally auctioned with much of it going to the Lula Lake Land Trust.

But there is more to do with maintaining existing trails and of course building new ones. Trail visionaries now are setting their sights on making it possible to walk on a continuous pathway from the North Chickamauga Creek Gorge to Cloudland Canyon. One key section is due to start soon - the Riverwalk from Ross's Landing Park to the foot of Lookout Mountain at St. Elmo. A connection is also needed from near Covenant College to the Cloudland Connector.

Cloudland Canyon State Park has over 3,485-acres, two major waterfalls, a disc golf course and of course miles of beautiful trails covered with wild flowers in the spring and fall foliage in the fall. The state park straddles a 1,000-foot-deep gorge on top of Lookout Mountain (also home to iconic Rock City) in northwest Georgia, encompassing enough natural drama to make much larger parks envious. Steep sandstone cliffs peek through a dense carpet of hardwoods and hemlocks along the canyon rim. Waterfalls tumble over rock faces. And rocky ledges offer seemingly endless views.

Scientists speculate that the canyon, one of the state’s deepest, was formed by several earthquakes that took place more than 200 million years ago, when the mountain was at the bottom of an expansive ocean. Today, Cloudland Canyon is a Peach State treasure and a hiker’s dream, with rugged trails traversing the rim and dropping deep into the the chasm that forms Sitton's Gulch (the canyon).

The park is home to 21 miles of hiking trails, and a trail expansion has added the Cloudland Connector Trail, a new 14-mile multi-use path that connects the park with nearby Lula Lake, a privately owned land trust also on Lookout Mountain.

The five-mile West Rim Loop is the park’s premier hiking trail; it follows the western edge of the canyon and offers views of the deep crevice and the surrounding mountains. The views begin stacking up on this lollipop loop within the first mile, and only get more impressive as you move farther along the rim.

The two-mile Waterfalls Trail is also a must, dropping into the canyon floor via 600 steps and passing the 85-foot Cherokee Falls and 60-foot Hemlock Falls in the process. The 6.5-mile Sitton’s Gulch Trail extends from the bottom of the Waterfalls Trail, following Daniel Creek through the heart of the canyon, giving you a bottom up view of giant boulders, waterfalls, and undercut cliffs.

To get a taste of what the new Cloudland Connector Trail will offer, hike the Long Branch Trail, a 5.6-mile piece of the Connector that’s ready for hiking. The trailhead sits 11 miles outside of the park on Nickajack Road.

Arguably the best view in the state park sits on the edge of the picnic area at an overlook along a short, paved path. From this perch, without much effort, you can see the canyon in its entirety as it cuts a swath down Lookout Mountain and empties into the valley below.