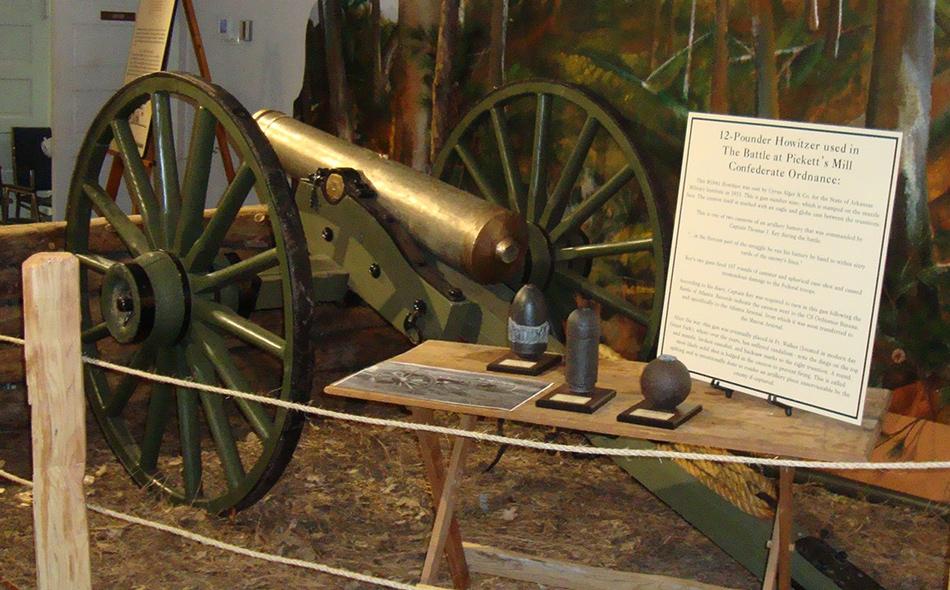 For almost all cannons used in the Civil War, markings on each indicate manufacturer, weight, inspector, identifying number, etc.  A gun now on display at Pickett's Mill is one of two bronze model 1841 12-pounder field howitzers manufactured by Cyrus Alger of Boston in 1851 for the Arkansas Military Institute.  The muzzle was stamped with the number 9 and had an eagle and globe cast onto the barrel.  Research by Michael Hitt indicates the gun was part of the Helena Artillery that served in the Army of Tennessee during the war.

By 1864, the unit was better known as Key's Battery, which saw considerable action, usually supporting Cleburne's Division, during the Atlanta Campaign.  Most relevantly, Key's Battery saw action at Pickett's Mill; and two of its guns (it's uncertain whether number 9 was one of those two) were crucial to repulsing the Federal attacks on 27 May 1864.  On 25 July 1864, Key's Battery was issued Napoleons captured from the Federals during the 22 July Battle of Atlanta, and number 9 was sent to the Macon Arsenal.  At war's end, the gun became property of the U.S. Army and was sent to the Washington Arsenal.  In 1879, upon request from Georgia for cannons for the state militia, number 9 was one of four guns (including two originally belonging to the Georgia Military Institute) sent to Rome, Georgia.  An 1886 flood affected the guns, and in 1887, when the Grant Park Commission requested that Governor Gordon provide four obsolete guns for display in Fort Walker in Grant Park, the Rome guns were selected.  You can still find old photos of Fort Walker with No. 9 identifiable.  Over the years, the gun was vandalized: initials scratched, dented, pieces broken off, overturned, etc.  In 1985, all the guns were removed from Fort Walker. Number 9 was removed from its carriage and displayed on a Grant Park monument, from which it was stolen in summer 1993.

In February 2010, a tip about stolen goods led sheriffs to a Spalding County farm, where they found many stolen items, including a crate with a damaged cannon inside.  Thanks to the efforts of Michael Hitt, the gun was identified as number 9.  Once the story received wide distribution, the sheriff's department was contacted by the MacArthur Museum of Arkansas Military History and the U.S. Army, among other agencies, inquiring about its ultimate disposition.  Eventually, the gun was reclaimed by the City of Atlanta and went back to the Cyclorama, where it sat in its crate in the entry foyer for a few years.  In 2014, the Atlanta History Center (AHC) struck a deal with the City to restore and relocate the painting, locomotive Texas, and other artifacts in the Cyclorama building.  AHC paid to have number 9 reconditioned by Historical Ordnance Works and mounted on a carriage built by the WPA for the city in the 1930s.  When the Cyclorama reopens at AHC, number 9 and three other guns will be displayed.  Until then, the gun is exhibited at Pickett's Mill, where it saw action over 150 years ago.  State Parks & Historic Sites staff built the new display.  During your next visit, make sure to admire the gun and marvel at its long, strange trip home!